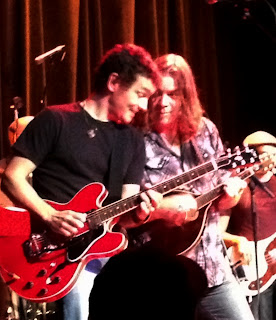 “When I first met Cory, I thought he had the prettiest voice I ever heard. It’s just too bad he’s so damn poor lookin’!”
I’ve been saying that for a few years now but last night, the words came not from me, but Alan Doyle… on stage in Halifax as he heads across the country promoting his new CD “Boy on Bridge”.
To clarify… for all you non-Newfoundlanders who read my posts… “poor” means “bad” or “ugly” not poor as in “he has no money”!
To clarify… for all of you who’ve never seen Cory and are trying to decipher my grainy photo…Doyle was being totally sarcastic!
Last evening, Dish and I enjoyed one song after the next of new Alan Doyle music mixed in with the ever-popular “Great Big Sea” tunes. It turned out to be a spectacular show! Doyle did not disappoint the adoring crowd as he told his stories and sang his tunes… joking about the thrill of making it on the cover of the Newfoundland Herald and his brand new “bobble head” doll.
I’ve been listening to the CD for a few weeks now… mostly ’cause Bones is the biggest fan I know and can’t get enough of Doyle’s music! I reviewed it in the post, “Somethin’ about a boy with a guitar”, but hearing it live…  was absolutely fantastic! The energy that boy emits is something else and the fiddle playing of Kendel Carson was beyond amazing!
Add to that… Dustin Bentall (son of Barney who I wrote about the other day in the post “Something to live for…” ) opened the show and was a treat to listen to. His song, Emmylou, had the crowd quickly falling for the adorable talent!
Tonight, they’re in Newfoundland and after that, they’ll head back home where they can pat themselves on the back. Eighteen shows from one end of the country to the other and a few gigs in the US thrown in for good measure. A band that came together to promote Doyle’s solo CD… sound as if they’ve been on stage together for years. It’s a testament to the long haired fellow in front of the mic… and the talent of those he chose to stand beside him.
The show tonight in St. John’s is sure to be a wild one as Doyle takes his CD “home”… where the band will then head back from whence they came, spend a bit of time with their kids and curl up with their loved ones over a glass of wine… celebrating their success… before heading on to the next adventure!
Which surely will be a good one!
Oh… and Cory… when @alanthomasdoyle sent out his twitter request asking folks what they’d like to hear… I resisted the urge to tweet “get @corytetford to sing Georgia” keeping in mind that it’s Doyle we’re supposed to be promoting and not you. However, for the record… I thought you were AWESOME… I feel incredibly proud to call you a friend… and you owe me a “Georgia”.
… and Alan… any chance you can sign a CD for my youngest girl “Bones”?
… and Dustin… I like to drink whiskey.
… and Kendel… HOLY CRAP GIRL!!!